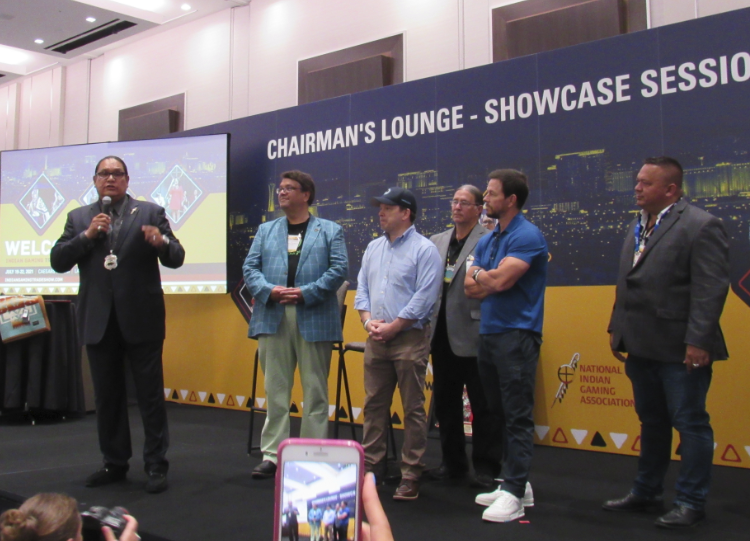 The announcement came in the Chairman's Lounge at the tradeshow where hundreds of people gathered around to get a glimpse of the celebrity Wahlberg brothers.

Wahlburgers restaurants were started by Mark, Paul and Donnie Wahlberg using recipes inspired from meals that the family became accustomed to as they were growing up with humble means in a family of nine siblings in Boston.

Mark Wahlberg, who was nominated for the Academy Award for Best Supporting Actor for his role as a police officer in “The Departed” in 2006, has appeared in over 50 films. His celebrity made him a hit at the Indian Gaming Tradeshow.

“We started this business with my brother Paul and Donnie, who is not here today and our mom, who recently passed. We want to continue to honor her. For her it was always about us getting along and supporting one another. It is an honor to share our family experience with your family," Mark Wahlberg continued.

Chef Paul Wahlberg, who has been cooking since he was a child, says he loves the idea of having Wahlburgers restaurants in Indian Country.

On Friday, the first Wahlburgers restaurant at an Indian gaming facility opened at the Morongo Casino, Resort & Spa in Cabazon, Calif.

“When I leave here, I’m driving to Morongo where we will open a Wahlburgers restaurant for the grand opening on Friday.

"Food, family, and fun are our pillars. Indian casinos provide food and fun. In Indian Country, there is a strong tradition of families, so we thought this is a strong combination of what we stand for and what you stand for, so it seems like a natural fit,” John Fuller, president and CEO of Wahlburgers said to Native News Online. Fuller said he would like to see 100 or 125 Wahlburgers restaurants in Indian Country in the next several years.