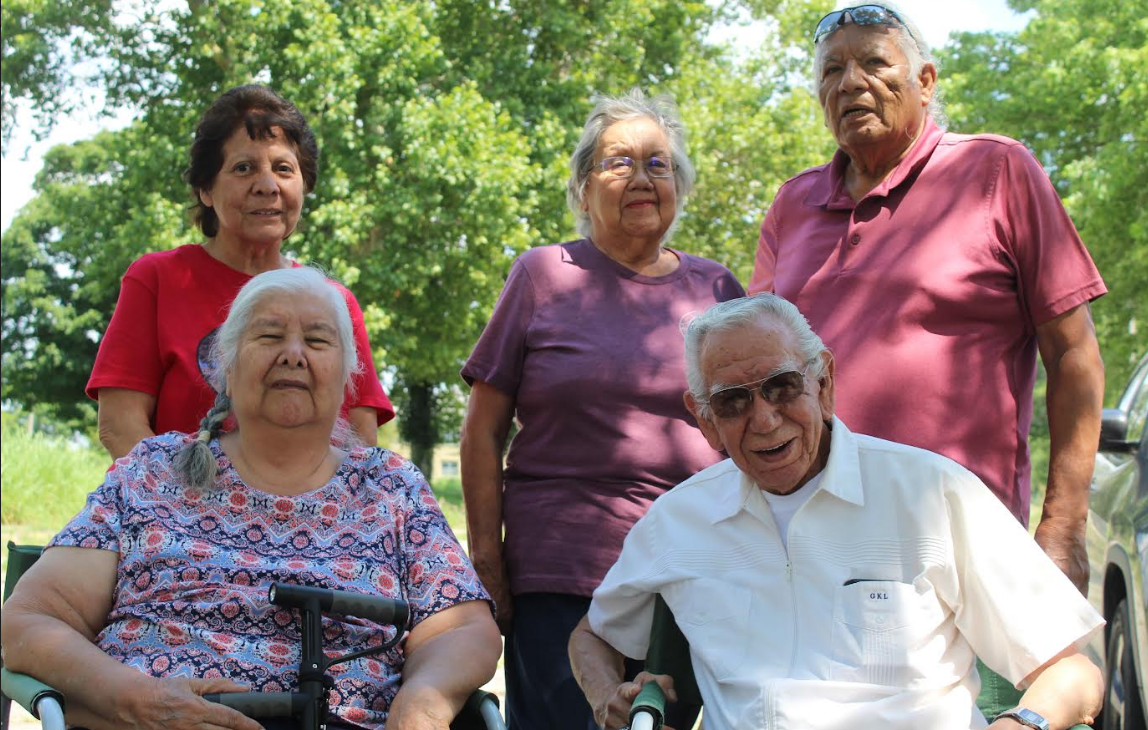 Editor’s Note: This is the first story in a series about the past, present and future of the Chilocco Indian School that was originally published by Blackwell Journal – Tribune, a newspaper based in Blackwell, Okla. The Journal-Tribune worked closely with Chilocco alumni to present a story that is a respectful and honest representation of the men, women and history of the school itself.

Just past a pair of casinos, less than a mile before Oklahoma’s Highway 77 gives way to Kansas, there’s an archway towering over an old metal gate that bears the name “Chilocco Indian School” in red and white lettering

[NOTE: This article was originally published by Blackwell Journal - Tribune.]

The gate opens to a long road, with grass sprouting from the cracks in the pavement. It takes you past an old armory and over a bridge that seems to act as a gateway. You leave Oklahoma behind as you cross over a serene, calm lake. Fifty feet away, the remains of a foot-bridge can be seen breaking the surface of the water like a wooden serpent. Overgrown buildings welcome you. There is more grass than concrete now. A large circle-drive wraps around a lawn, with a dried-up fountain on one end and a forgotten student center on the other.

Chilocco is a name that virtually anyone growing up in and around Kay County has heard. An abandoned town seemingly left overnight, with books still on desks and shoes left by doors. It conjures images of the similarly vacant buildings and homes of Chernobyl in Russia. Like that ghost town, Chilocco is ripe with urban legends and is the subject of many a late-night dare.

But the truth is, the only things roaming the streets and buildings of the Chilocco campus when the sun goes down are memories. Fond, warm memories of sneaking in packs of cigarettes and socializing at the jukebox during a Saturday night dance at the Flaming Arrow. Memories of falling in love, watching the raven-haired women from tribes as far west as Washington state and as far east as New York walking barefoot through the lawn.

Memories of playing golf. Of slipping off to the “state line” gas station and grabbing a burger.

For five alumni of the Chilocco Indian School who reminisced on a warm Monday morning, sharing stories of their younger years as the gentle summer breeze stirred the moss-covered buildings and wildflowers, it wasn’t the dark internment camp that many have heard of. To them and thousands of others, it was home. A self-sustaining community that made its own living, where many found everlasting love and friendship. A community that, in 2021, is looking toward a brighter future.

Chilocco Alumni Association President Jim Baker, a graduate of Chilocco’s Class of 1960 and the school’s second-to-last superintendent, painted a picture – a figurative one – as he mentioned he put down his brush for the last time upon graduating. With him were fellow graduate and wife Charmain Baker (Class of 1962), Garland Kent and wife, Lucy (1958), and treasurer Emma J. Falling (1965).

Chilocco Indian School was created before Oklahoma as we know it was recognized as a state. The product of U.S. Army officer Richard H. Pratt, Chilocco came to be in 1884 as an agricultural school for Native Americans.

The educational style, like many boarding schools, was “militarized,” Baker recalled. But it wasn’t all routine. Chilocco was filled with life and, like so many other communities, love.

Kent met Lucy at Chilocco – a common occurrence, he and Baker agreed.

“I had this cute girl in my class,” Garland Kent smiled. “I thought to myself, ‘Hey, I like this girl.’ She liked me. At Chilocco, you lived with these people. You saw them every day. It wasn’t rare at all to see people dating and, years later, getting engaged.”

Baker met his first wife at Chilocco as well. He recalled her fondly, speaking with a clenched jaw and misty eyes. She died in 2010. But there was no remorse in Baker’s rugged voice – only love.

“You had to get permission slips signed when you were dating someone,” Baker said, laughing. “You had to go report to their dorm parent, and you took them out to a Saturday night dance or what have you. … Then you’d walk them back across the lawn, right here.”

He stretched his arm over the lawn. “And on the other side of the street, you’d have a row of dorm supervisors checking their watches and moving you along.”

“You could get in trouble if you weren’t back at a certain time,” Baker said. “So, it became a joke, to say that a kiss was worth the hours you’d get of detention service.

“You could always tell which girls were dating the fellas that worked in the cleaners. Their pants were always pressed. Their shirts were perfect.”

He elaborated on some of the Chilocco “in-jokes” after admitting he was “snagged” by his wife during their time there.

“Anytime we had new kids, you’d have guys hollering ‘new meat’ walking around the oval,” he said.

Charmain Baker giggled with embarrassment when recalling her interaction with a bus of Navajo students.

"When the Navajo busses came, I decided to greet them, as I could see no one else around greeting them,” she said. “So, I stood outside their bus, saying ‘Hi! Welcome! How was your trip?’ smiling and trying to look friendly. They just looked at me and looked away like I was crazy. After doing that a few times with no response, I finally gave up. I later learned that none of them could speak English."

She smiled and said:

“The staff was probably inside the building waiting for them with a translator.”