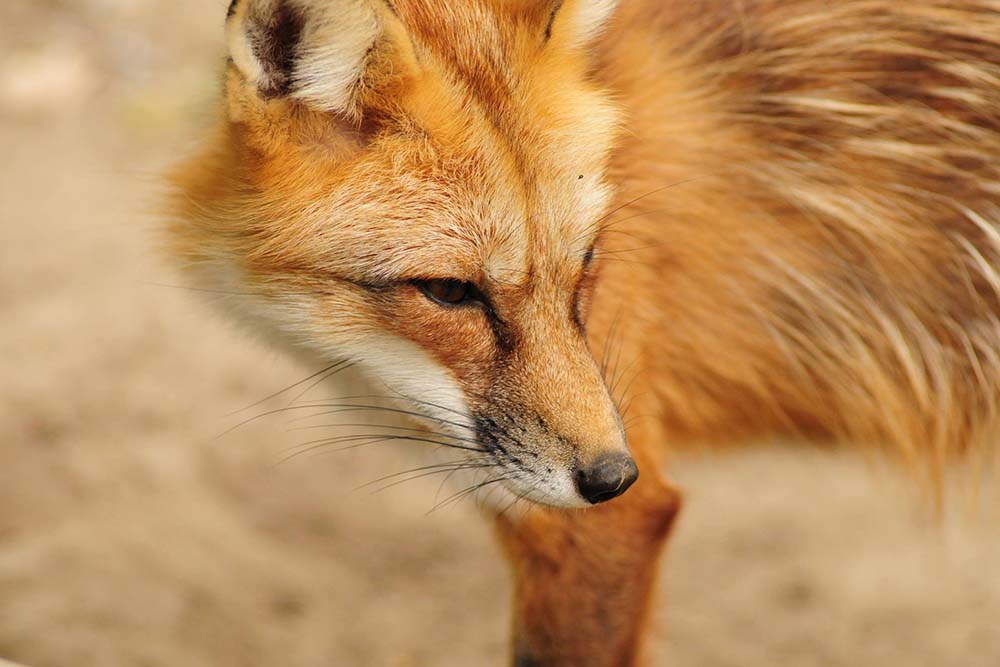 This weekend and next week in Indian Country, the Indigenous animals and people of the Plains get their due at the zoo, Muscogee Nation hosts a hot premiere, and a boundlessly talented Tlingit weaver makes waves at a spirited art show.

Navigate Native News Online’s event guide to map out your own culture trip.

In The Spirit: Contemporary Native Arts 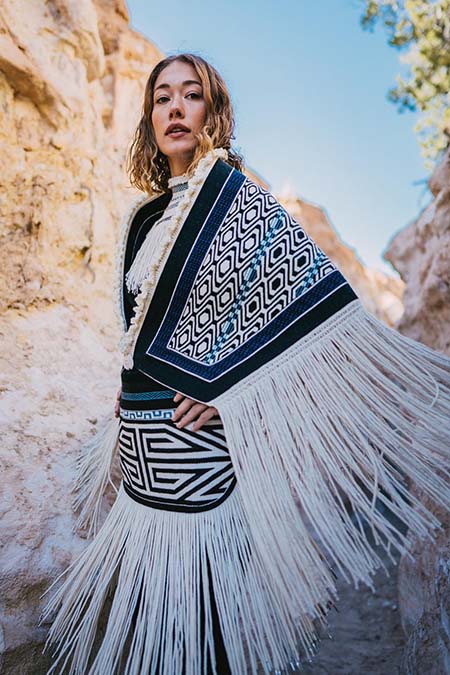 Flowing with fringe and deep shades of blue, Tlingit weaver Ursala Hudson’s award-winning ensemble is true to its name: We are the Ocean.

Hudson’s wearable masterpiece of wool, cedar, silk, mother of pearl, steel and leather recently was named Best of Show at the IN THE SPIRIT Contemporary Native Arts exhibition on view at The Washington State History Museum through Sunday, Aug. 29.

The show comprises paintings, carvings, bead work, basketry, digital art, multimedia, and textiles by 22 artists from the Pacific Northwest and beyond.

For Hudson, the Best in Show honor is a collective success for her lineage and immediate family, including her sister and mother, the celebrated weavers Lily Hope and the late Clarissa Rizal, who along with Hudson, are instrumental in keeping traditional Alaska Native Chilkat and Ravenstail weaving alive.

“The ensemble that won is a compilation of my first weavings, just recently completed, yet I feel strongly that they are the product of my entire lifetime thus far—an art form of my ancestors, a childhood beside my mother’s loom, a career in design, and a deep commitment to the Higher Nature,” Hudson told Native News Online. “Therefore, it is not so much my own work as it is the work of lineage and timelessness. When I watched the jurors announce best of show, I was washed in gratitude to have been the vessel to create such work.”

Other artists in the show include Navajo painter Gilmore Scott, whose work is imbued with shades of the desert and and Diné rug-inspired geometric shapes, Northern Arapaho and Seminole artist Carol Emarthle Douglas, whose coiled hemp Healing Hands basket is an intricately woven meditation on an exhausting year.

“The Healing Hands basket was created to reflect the year of 2020,” Douglas said in a statement. “The raised hands are a way of giving thanks and offering prayers or a way to ask for assistance. The color red symbolizes power, passion and strength.”

The exhibit also has a festival component. On August 7, from 10 a.m. to 5 p.m the IN THE SPIRIT Arts Market & Northwest Native Festival will take place at three locations: The Washington State History Museum, Tacoma Art Museum and Museum of Glass. The indoor and outdoor event includes  an artist vendor market, cultural music and dance, art-making opportunities, and free access to museum exhibitions. 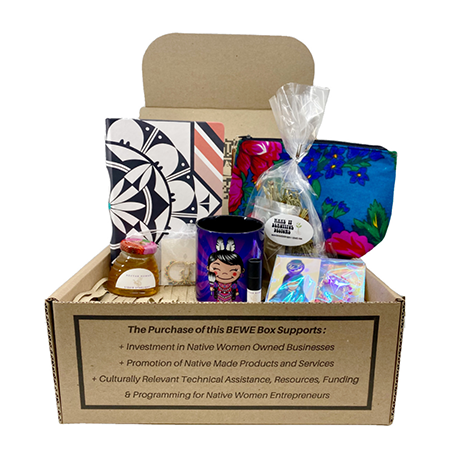 Among the goodies in the limited edition curated box of items from Native American woman artists, activists and environmentalists, includes medicinal Southwestern Indian Tea from Shawna Shandiin Sunrise (Navajo/Kewa Pueblo) of makeitbeautifuldesigns and cute cartoon character mugs by Leah Lewis (Pueblo, Hopi, Zuni, Dine) of Nsrgnts, in which to enjoy it.

And you can sip with pride, knowing that the proceeds are being used to empower Indigenous businesswomen.

If you want your own BEWE Box, you better be on the ball. There are  only 150 of  them, and they go on sale at noon MST on the Native Women Lead  website. Part of Native Women Lead’s Fair Trade Initiative, the box also contains jewelry and accessories, natural beauty and health products and items inspiring creativity.

In addition to the tea and mugs, the boxes include The Balance Notebook by Michelle Lowden (Acoma Pueblo) of Milo Creations, honey and lip balm from Melanie Kirby (Tortugas Pueblo) of nectarnomad, hand-sewn scarf bags by Glenda Bennett (Navajo)  of glendabags, and beaded hoop earrings by Alicia Littlebear (Santa Ana Pueblo) of a.littlebear and Rufina Abeita (Isleta and Laguna Pueblo) of bluecorncreations.

The Dakota Zoo and the Sacred Pipe Resource Center are inviting folks to gather ‘round and hear stories about the cultural significance of Indigenous animals of the Plains.

Tales about the bison, eagle, bear, elk, deer, porcupine, badger, wolf, coyote and fox will be told by Native American youth being trained in the storytelling arts during weekly summer storytelling sessions happening through mid-August.

Native American Storytime is one part of a partnership project between the Dakota Zoo and  Sacred Pipe Resource Center, an organization addressing and supporting the needs of Native people living in the Bismarck-Mandan area.

The project, intended to interweave the culture of regional Tribes into the Zoo setting, also features a medicine wheel rock sculpture and ten signs representing Plains animals. The signs  include information about the current and historical meaning of the creatures, and also contain an audio feature that says the animal names in the languages of each North Dakota tribe. 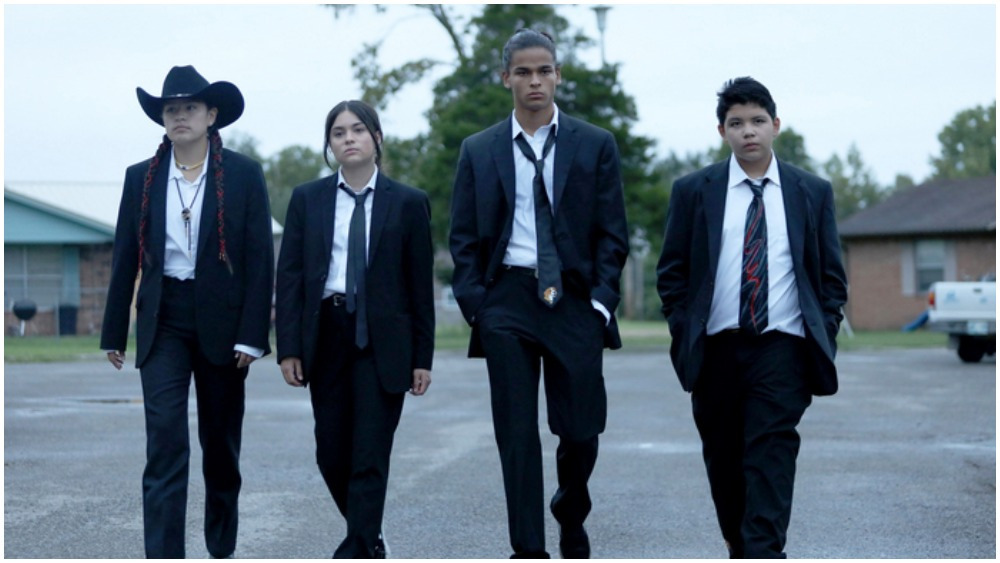 The Muscogee Nation will host a premiere of the first two episodes of the new FX series "Reservation Dogs" on Sunday, Aug.1, at River Spirit Casino Resort in Tulsa, Okla. (Photo/FX)

A week before it’s official premiere on FX, the Muscogee Nation is presenting a free screening of the first two episodes of the upcoming FX comedy “Reservation Dogs.”

Centered on four Native American teens set on scheming and scamming their way from their Oklahoma reservation to California, Reservation Dogs is co-created by Taika Waititi and Sterlin Harjo.

Harjo will be at this weekend’s advance screening. Attendees are encouraged to wear traditional attire to the event, which is for ages 18 and up. 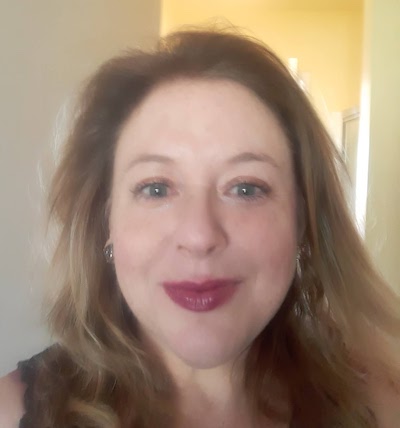