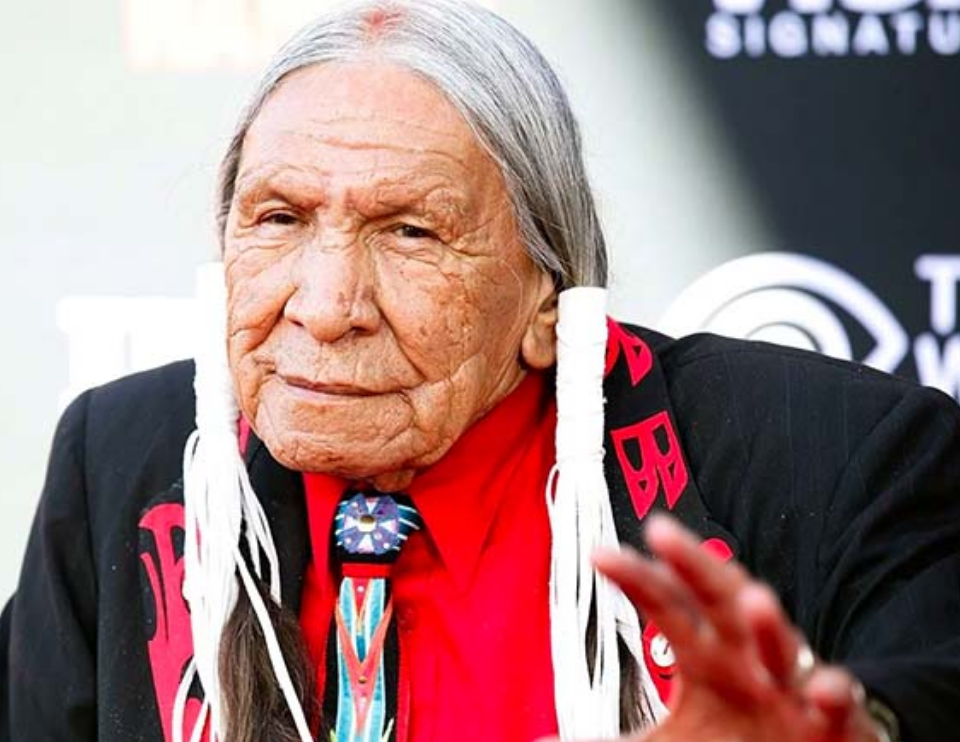 LOS ANGELES — Legendary American Indian actor Saginaw Grant walked on to the spirit world Tuesday, July 27, 2021. Grant was a widely respected elder in Indian Country. He was the hereditary chief and a respected citizen of the Sac and Fox Nation in Oklahoma  with blood ties to the Iowa and Otoe-Missouria Nations. He was 85.

The announcement of his passing was posted on his Facebook page:

“It’s with heavy hearts we announce a warrior has been called home. Saginaw Morgan Grant, the hereditary chief and medicine man of the Sac & Fox tribe, traveled the world speaking of his traditions, his experiences, his sobriety and his faith as both a Native American and a Christian.”

Born in Pawnee, Okla. in 1936, Grant did not become an actor until later in life. However, once he took up acting, he felt enormous pride in sharing culture through films, television programs and public speaking. He admitted that he never aspired to be an actor, but when someone approached him to ask him to be a part of a Chrysler automobile commercial, he said yes and his acting career was launched. Since that day, he has starred in many films like the "Lone Ranger" with Johnny Depp, "Breaking Bad" and "The World’s Fastest Indian" with Academy Award winner Anthony Hopkins.

A recipient of a Lifetime Achievement Award in 2014 at the Oceanside International Film Festival, Grant offered some advice about respect during an interview.

“Teach the children the traditions of our past. “Every nation, every people needs to keep their traditions. To remember who they are. Be proud. Remember, If you know who you are, you will always get somewhere on Mother Earth.” Grant continued in the interview.

“If we lose our traditions, we lose our people,” he said. Grant always made sure that people heard and understood his message of strength in spirituality and tradition. Many people describe Grant as humble, respectful, and above all, traditional.

Grant was presented the Living Legend Award by the Native American Music Awards (NAMA). In 2018, his album “Don’t Let the Drums Go Silent” received Record of the Year from NAMA.

Last year soon after the Covid-19 pandemic hit the United States, Grant released the following statement that was featured on Native News Online:

“This isolation is temporary for most, but for many elders what you are now experiencing is the norm. It is human nature to come together in times of crisis, but this time we are having to stay apart for the health and safety of one another. Take this opportunity to get to know yourself and what’s important. Take this time to reflect on God’s purpose for you. Check on others and let them know you care. Take a moment to find the beauty in a negative situation...spend extra time with someone and let them know they’re loved. Recognize the opportunities you have in every situation, know that your choices in a crisis define who you are, let this define you in a positive light.”

He cherished being a veteran. Grant served in the United States military as part of the U.S. Marine Corp during the Korean War. He bore the mark of this service as a proud reminder and had a deep love for bulldogs (the mascot for the Marine Corp).

“Meeting this Hollywood actor for the first time was amazing. Many people didn’t know that he was a Native Korean veteran, especially those in Hollywood,” Joseph Podlasek,  CEO of Trickster Cultural Center and national organizer of the National Gathering of American Indian Veterans, said to Native News Online on Thursday. “We became good friends at our first encounter, and he was such a down to earth man, nothing like I had expected a Hollywood actor to be. His video interview contributed to our Trickster films, which was nominated for an Emmy in 2019. He loved coming to Trickster and engaging with friends annually, including more of his people from Oklahoma.”

Grant, a multi-talented individual, not only acted, but also was a jewelry maker, dancer and artist. It was through these things that Grant expressed his value for tradition and respect.

Earlier this year, Grant lost a nephew and his sister Stella who both passed away from Covid-19.

Funeral arrangements were pending at press time. May he rest in power.

From “Legacy of Saginaw Grant” (2014) by Native Driven Network.

“Everyone on earth is born with spirituality.”

“Remember to take your time. When you take your time, you’ll take in everything that comes into your life and not just rush through it.”