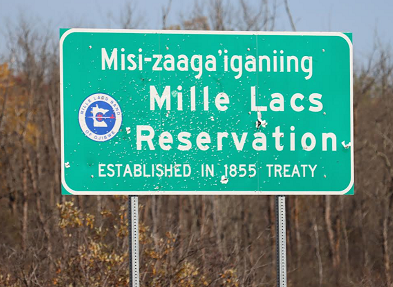 MILLE LACS INDIAN RESERVATION — On Friday, U.S. District Judge Susan Richard Nelson wrote a 93-page opinion on Mille Lacs Band of Ojibwe v. County of Mille Lacs affirming that the boundaries of reservation were never dissolved, confirming the Tribe’s sovereignty on its lands. The Tribe filed a federal lawsuit in 2017 arguing that the (Mille Lacs) county prevented the Mille Lacs Tribal Police from policing within the reservation boundaries.

“This ruling affirms what Shaboshkung began fighting for in the 1860’s, what every leader since has carried on, and what we have always known—that our reservation was never diminished, that we are non-removable, and this reservation will be our home into perpetuity,” said Mille Lacs Band of Ojibwe Chief Executive Melanie Benjamin in a press release on Saturday, March 5.

The County maintained in the lawsuit that the 1855 Treaty Reservation was terminated by. Congress by subsequent treaties, statues, and agreements with the Mille Lacs Band of Ojibwe and, also, that the county law enforcement did not interfere with tribal law enforcement’s ability to police. The Tribe argued that the county undermined tribal policing, contributing to an influx of criminal activity.

“Over the course of more than 160 years, Congress has never clearly expressed an intention to disestablish or diminish the Mille Lacs Reservation,” wrote Judge Nelson in her decision for Mille Lacs Band of Ojibwe v. Cnty. Mille Lacs yesterday. “The Court therefore affirms what the Band has maintained for the better part of two centuries—the Mille Lacs Reservation’s boundaries remain as they were under Article 2 of the Treaty of 1855.”

Judge Nelson wrote thought her opinion of the relentless efforts of Shaboshkung and other ancestors to hold the United States accountable for keeping President Lincoln’s word that the Band could remain on its lands forever.

“While the federal government and the State of Minnesota both acknowledge the 1855 reservation boundary, Mille Lacs County has refused to do so,” the Tribe said in a press release.

Over the next several days, attorneys for the Mille Lacs Band will be reviewing Judge Nelson’s opinion, but her decision is considered a historic milestone.

“It is our sincere hope that this decision will allow us to move beyond the need to fight with Mille Lacs County over our very existence; instead we invite the county – and all of our local governments – to come along side us and join with us in the fight for a better future for all of our communities for generations to come,” said Benjamin.

Mille Lacs Reservation is located in east central Minnesota and is the perpetual home of the Non-Removable Mille Lacs Band of Ojibwe. According to the tribe, more than 2,300 of the Band’s 4,700 members live within reservation boundaries. The Band supports its members with a variety of services for economic, social and cultural advancement, including health services, early childhood and youth centers and economic development planning.